Emotion can affect one's memory of an occurrence. According to LeDoux, a psychologist who argued that there are biological pathways of emotion in the brain, the arousal of emotion will facilitate the memory of events that occur during that aroused state. However, one should always remember that memory can be enhanced and amplified by an intense emotion, but will not always be accurate.

The theory of flashbulb memory was suggested by Brown and Kulik in 1977. This theory suggests that some memories are remembered distinctly - even after time had passed - because the events incited highly emotional responses at the time. The emotional events are recorded in the brain as if by the flash of a camera. 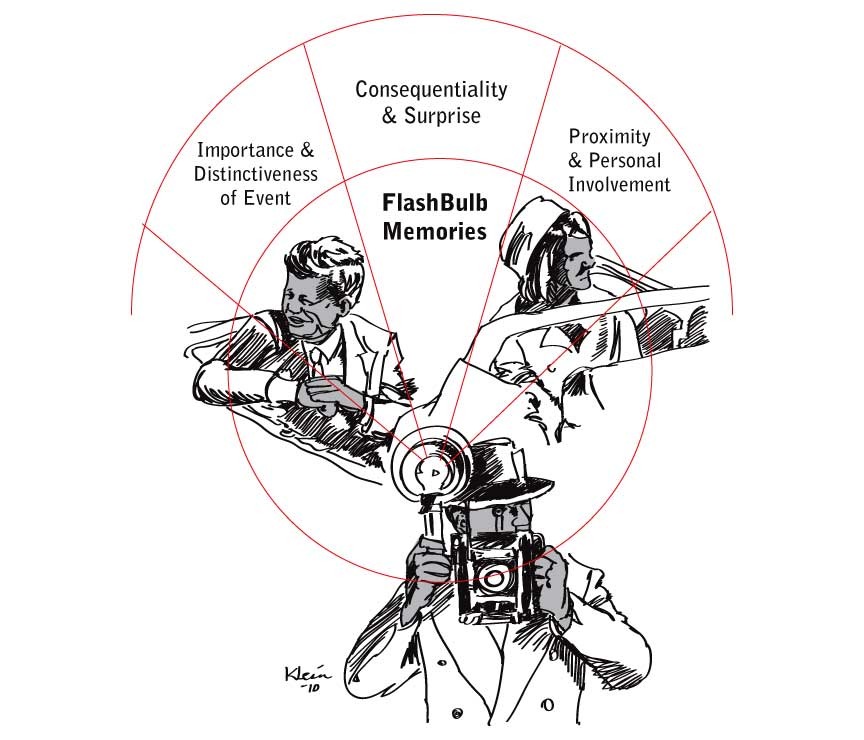 Brown and Kulik found that people had clear memories of where they had been, what they had been doing, and what had happened in events in which they were emotionally involved. Examples include when JFK and MLK Jr. had been assassinated. These participants of the study were asked if they also had flashbulb memories of personal events. Out of the 80 participants, 73 said yes for events that were especially emotional, such as traumatic events or the deaths of family members.

Explaining the actuality of the flashbulb theory: Brown and Kulik attempted to explain the biology of this effect by suggesting that there were special neural mechanisms that triggered emotional arousal for unexpected or extremely important events. This hypothesis is now supported by modern neuroscience: emotional events are better remembered than less emotional events. While reasons are still unknown to us, it could be because of the involvement of the amygdala (which is responsible for emotional responses and memory.


Vivid Memories are Not Always Accurate:

In January of 1986, seven astronauts aboard the space shuttle Challenger died due to a tragic accident. This event was aired on television, so it was a shocking event for all its audience. Neisser and Harsch (1992) investigated people's memory accuracy of that event, 24 hours within the timeframe that the accident occurred, and once again 2 years later. They found that the participants were very confident in the accuracy of their memories, but 40% of them had distorted memories after the second year. Neisser and Harsch analyse that this is due to post-event information that has jumbled up their initial memory of the events. Inaccuracy of emotional memories are common, just as they are vivid. Talarico and Rubin found in 2003 that the confidence that one has of his memory is not correlated with the accuracy of that memory.

While post-event information can distort memories, it is recognised that present-views and emotions of past-events also affect one's memory. For example, men who are divorced will reflect back upon events that occurred while they were married in a more negative perception than they actually would had they remained in a successful marriage (Holmberg and Holmes 1994).